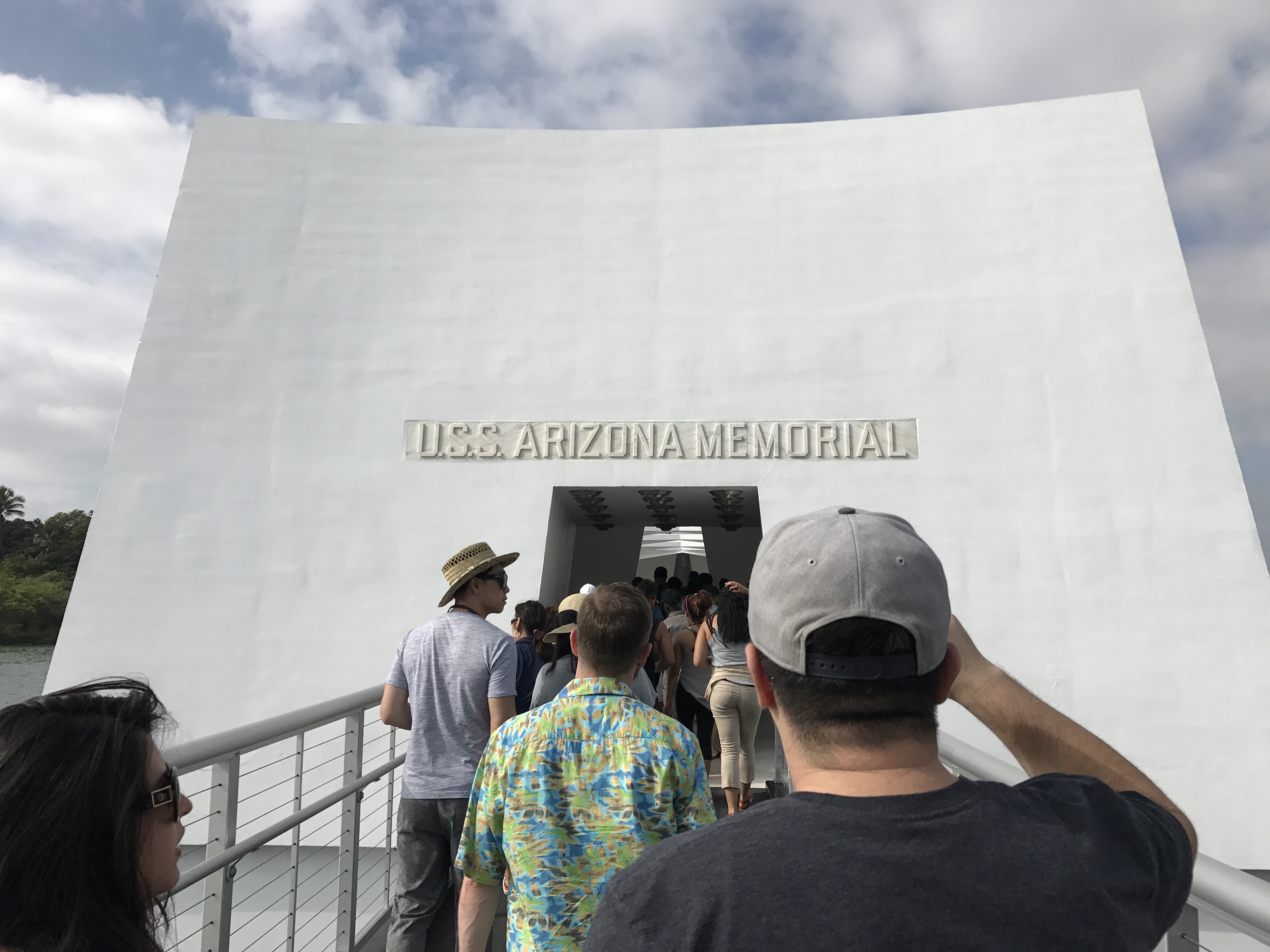 Hawai’i was an interesting stop. It was a refueling port for the ship, which meant we were only in port for one day. Consequentially, we could not do any independent traveling and were only able to leave the ship if we went on a SAS sponsored trip.

I was fortunate to have one of my field classes in Hawai’i, which meant that I was able to leave the ship for free (although nothing is really free). Field classes are an experiential component to every academic course sans the required Global Studies. Each professor designs a project in any port country along the route. The itineraries always reflect the course curriculum, bringing theoretical concepts to life by highlighting their practical applications. In this case, the course was International Security.

International Security is one of my favorite courses on this voyage. The professor, Dr. Karlin, is amazing: she just recently left the Obama administration serving as an advisor to the Secretary of Defense. The amount of knowledge and experience she brings is unparalleled. The course content matches the excellence of the professor. Before Semester at Sea, my experience in international politics was rather limited. However the globally centered nature of all my courses, including those that don’t include “international” in the title, have given me a much wider perspective on both foreign and domestic issues.

The field class was actually pretty cool. We visited the U.S. Pacific Command Center (PACOM) through the connections of Dr. Karlin, and we’re briefed on some fascinating information. Specifically America’s possible future of armed forces in the Asia-Pacific region.

After we left PACOM, we headed over to have lunch at the aviation museum and then headed over to the USS Arizona Memorial. I visited the memorial before on a band trip in high school, and at first was disappointed because I wouldn’t be able to experience anything new. Yet, I found the second visit more sobering than the first. If nothing else, the entire field class was an opportunity to reflect on death, patriotism, and the value of human life across borders.

The way the speakers at PACOM spoke of death, in what I thought was rather lax and detached from the humanity of the individual, left me feeling unsettled. I know that the men who spoke before us were honorable, passionate patriots. If anything, I think we’re all products of a society that undervalues life and overvalues the display of power.

After an exciting and hot day out in the Honolulu sun, we ventured back to the ship to relax and have dinner. Then came the real fun–the Walmart trip! Busses of SAS passengers headed to the nearest Walmart to pick up our last few items before we journey across the Pacific Ocean to Kobe, Japan. Lots of students bought snacks. Lots of snacks. I tried to stick to the basics: some face towels (because we don’t have any; that really surprised me), a new, nice firm pillow, and a few toiletries I wanted to make sure I have a surplus of.

In reality I played myself. I expected Walmart to have a decent selection of books. Well I was dead wrong. They had one aisle of cheesy bestsellers that didn’t look like anyone every bought them. My friend Deja is a rider though and ran over to the nearest Barnes and Noble with me. We were in a bit of a time crunch, so we were trying to beat the clock.

I only brought two books for pleasure reading with me mainly because I didn’t have enough space or weight allotment in my bag. To my surprise, I have an abundance of free time on the ship and am flying through my first book. Naturally, I’m fearful of being stuck on a ship for months with no good reading material. While we have a library on ship, I’m particularly interested in continuing my research from POLT 402 on what some have called “America’s forgotten country.”

Now I have some good books to pair with the greater people I’ve met. The captain is predicting high seas over the next leg of our journey. Time to secure all the loose items on my banister.