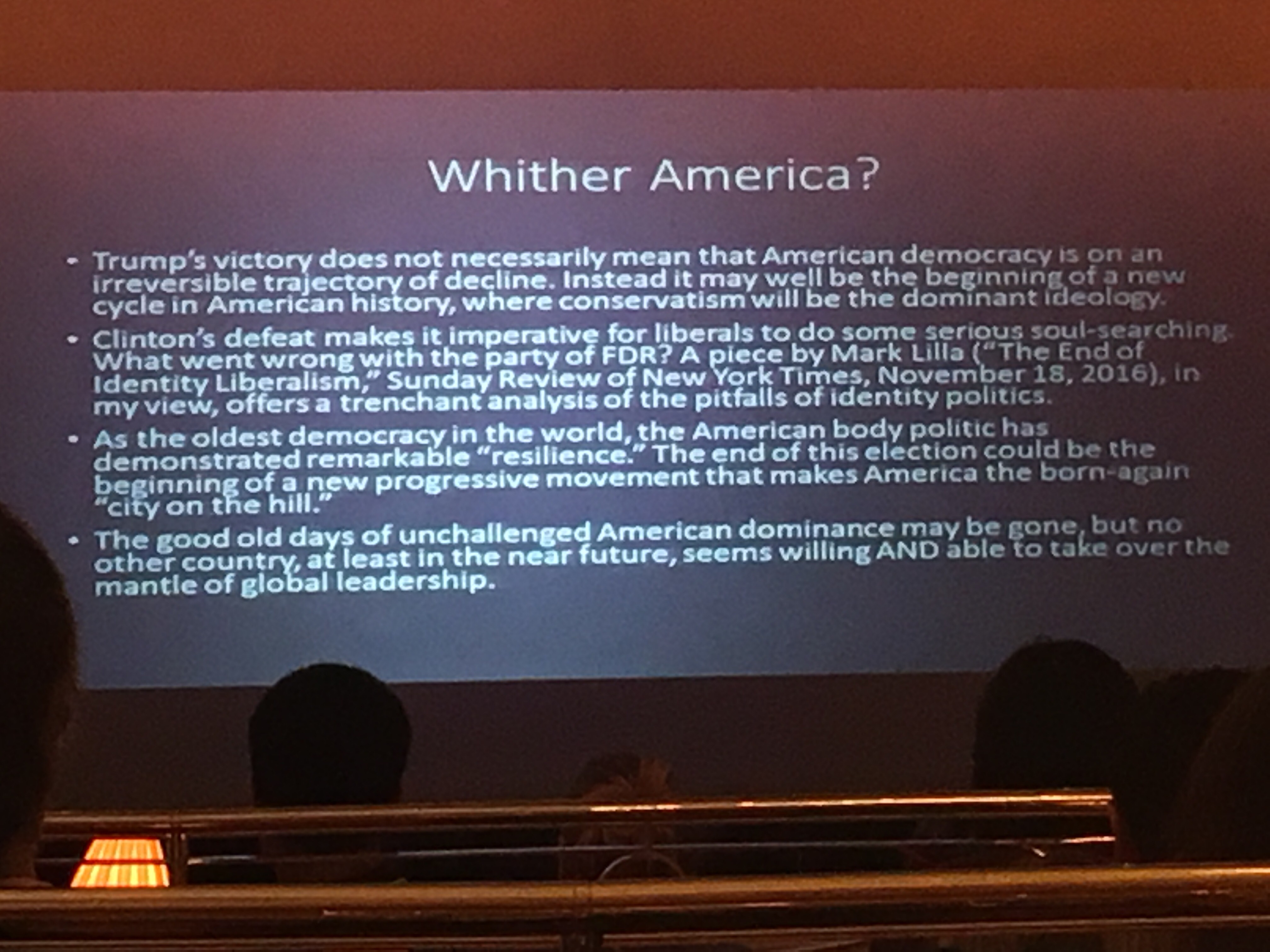 Last night I attended the first “cross currents” lecture of our voyage. The talk was one of many to come in a series delivered by faculty members on varying topics. This particular lecture was given by Prof. Tao Xie, of China, titled “American Democracy Disconnected.” In his talk, Prof. Xie offered a qualitative analysis of the 2016 Presidential Election from the Chinese perspective—including his own, the perspective of his colleagues, and general wider sentiments from the Chinese public.

The arguments put forth resembled many of the same arguments I’ve heard attempting to explain why the American public voted the way we did. While Hillary Clinton clearly won the popular vote, Trump decisively won the presidency. This fact may clearly express Xie’s main argument, albeit not for the same reasons.

Xie argues that American Democracy has failed. He says that Americans are tired of politics being ruled by an oligarchy of the rich and powerful, and that this election clearly exposed many of America’s social ills—particularly the national identity crisis. He further postures the election result as a “representation of the public’s complete rejection of the elite and willingness to gamble” for something new.

I disagreed with a lot of Xie’s statements regarding whitelash, particularly when he contended that Black people may not really be the current victims of racial injustice in America. It seemed as though he was implying that poor white folks were victims of racial injustice, but white Americans do not face systematic discrimination due to their whiteness. However, in his positioning of American identity, he defined it as such: “America is Democracy First, WASP First, America First.” I agreed with this, particularly in relation to political, racial, and global identity. American’s value Democracy. Americans, when asked to think “who is an American,” typically imagine or identify a white Anglo-Saxon protestant man. Americans also tend to believe in American exceptionalism, and exude a deep sense of national pride. While this is a generalization, I think it works well to explain why Trump was so successful. As Prof. Xie stated, “Trump is anti-money in politics, anti-immigration, and [puts America first] (MAGA).”

Xie also related most of these phenomena to “whitelash,” a term coined, constructed, and (loosely) affirmed by numerous books he cited and contemporary American media. While I have my doubts about its legitimacy, or rather the practical application of the term and the benefits therein, it was interesting to here the prospective of someone on the other side of the border (and world).

So often I find myself consumed in the thoughts and opinions of my peers. It’s so easy to be blinded by the American perspective, even in an ever globally connected world. I appreciated Xie’s willingness to present his findings, cognizant of the possible criticism from an unfamiliar political environment.

The talk represented a big piece of what makes Semester at Sea such a beautiful experience: the convergence of diverse perspective immersed in a loving shipboard community, engaged in dynamic intellectual pursuit in context of a greater global world.